Thai, The Philippines and Indonesian Flag 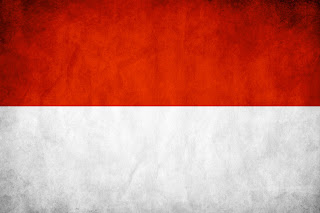 Flag of the Republic of Indonesia

The national flag of Indonesia, which is known as Sang Saka Merah-Putih ("The Sacred Red-and-White") or Bendera Merah-Putih ("The Red-and-White Flag") or simply Merah-Putih ("The Red-and-White"), or sometimes referred to as Sang Dwiwarna ("The Bicolor") in Indonesian is based on the banner of the 13th century Majapahit Empire in East Java. The flag itself was introduced and hoisted in public at the Indonesian Independence Day ceremony, on 17 August 1945. The design of the flag has remained the same ever since.
The design of the flag is simple with two equal horizontal bands, red (top) and white (bottom) with an overall ratio of 2:3. The flag is
similar to the flag of Poland and flag of Singapore. The flag is identical to the flag of Hesse (a German state) and flag of Monaco, excluding the ratio. Red represents courage, while white represents purity of intent.
The Naval Jack of Indonesia is reserved for sole use by Indonesian Navy. It flies from every active Indonesian war ship mast. The design of the jack is described as nine alternating stripes of red and white. It is nicknamed Ular-ular Perang (War Pennant or literally "War Snakes"), probably due to the stripes' design. The naval jack dates to the age of Majapahit Empire. The Majapahit Empire, which was renowned for its great maritime strength, used to fly similar jacks on its vessels. 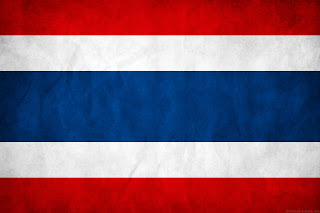 Flag of Kingdom of Thailand

The flag of the Kingdom of Thailand shows five horizontal stripes in the colours red, white, blue, white and red, with the middle blue stripe being twice as wide as each of the other four. The design was adopted on 28 September 1917, according to the royal decree about the flag in that year; the Thai name for the flag is ธงไตรรงค์ (Thong Trairong), meaning tricolour flag. The colours are said to stand for nation-religion-king, an unofficial motto of Thailand, red for the land and people, white for Theravada Buddhism and blue for the monarchy, as having been the auspicious colour of King Rama VI. As the king had declared war on Germany that July, some note the flag now bore the same colours as those of Britain and France. 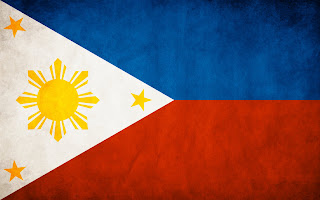 Flag of the Republic of the Philippines

The National Flag of the Philippines (Tagalog: Pambansang Watawat ng Pilipinas) is a horizontal flag bicolor with equal bands of royal blue and scarlet red, and with a white equilateral triangle at the hoist; in the center of the triangle is a golden yellow sun with eight primary rays, which represent the country's first group of provinces that started the 1896 Philippine Revolution against Spain; and at each vertex of the triangle is a five-pointed golden yellow star, each of which represent the country's 3 main regions - Luzon, Visayas and Mindanao. This flag can indicate a state of war if it is displayed with the red side on top